Sword Art Online is the five million selling light novel series by Reki Kawahara (who also penned Accel World) which, having been dutifully animated, is the disputed front runner for most popular series this season. One of the final things female protagonist Asuna says in the latest (tenth) episode, before the cringe-inducing hokum from male lead Kirito, is that she dreamt of the real world and worried that her time in the titual Sword Art Online, would be lost.

reach level 100 and be released from the shackles of this poor simulacra of a world
Having been ceremoniously trapped within the tiered virtual world upon launch, replete with blood red skies and the inflated visage of the lead programmer, it has been almost two years and there have been murumurs of some of the 10,000 original players settling down and starting a life rather than continuing to fight. Asuna's words though brought to mind Plato's fictional dialogue with his teacher Socrates, commonly termed the Allegory of the Cave.

Simulated worlds are always going to evoke that kind of thinking though and to its credit, SAO rarely goes an episode without reminding the audience that this is still a game. In the anime we are only given the briefest glimpse of the outside world at the head of the series and were it not for the repeated recourse to menus, SAO would be just another fantasy anime series.

Plato was a western philospher though, and his eastern counterpart both in subject and time period, was Zhuangzi who is the source of the butterfly dream thought experiment. That sounds a lot more like what Asuna could have been alluding to, her dreams were that of the "real" world while her waking was that of the "virtual", what's to say that the world of SAO isn't in fact purely Asuna's dream? Reki Kawahara would obviously disagree, as would the remaining episodes of the anime. 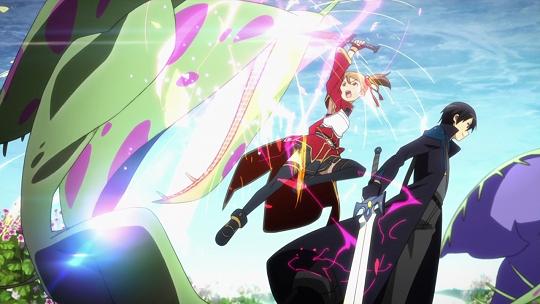 That duality of real and imagined has been used in many other series and media. The one which jumps immediately to mind is Iain Banks' The Bridge which sees the protagonist Alex trapped within a world born from his comatose mind. Both that and SAO are very clear as to the delineation of the different worlds; however if you take Red Dwarf's "Back to Reality" episode (S05E06) or Buffy The Vampire Slayer's "Normal Again" (S06E17) then the idea of the "reality" you knew and the actual "reality" is used as a weapon to disorientate and make victims question, well, everything.

All well and good but full virtual worlds are relatively rare in anime. There is of course the multimedia behemoth .hack which spiraled into labyrinthine OVAs, TV series, games and the like, but the grandaddies are without question Ghost in the Shell and Serial Experiments Lain. The former takes an approach similar in spirit to SAO with the virtual world separate and fully sensory but tantalisingly close with integrated connectivity rather than clunky head-gear and the "body touching" that the in-world Sword Art Online uses to get a measure of a player. The latter on the other hand is all about blending the two worlds (the Real and the Wired) and the catastrofuck that this would cause.

The enforced residence of SAO's world though harks back to Plato's cave and an unhealthy injection of religion. Being able to teleport players at will and, for all intents and purposes, control the world, life and death makes the lead programmer a deity to those trapped within. Whether part of a large social experiment or just the result of a nefarious god-complex is unknown, but the rules of the world ("physics") are laid out for the players as is the road to enlightenment - reach level 100 and be released from the shackles of this poor simulacra of a world. Those of a creative mind could even compare the programmer's proclamation to the Christian Revelation at Sinai.

However Asuna's other words, that players are "settling down" is the expected side effect of what is essentially institutionalisation. Commonly seen in long-term stays within prisons and mental hospitals, many people will indulge in erratic behaviour (Asuna's stalkerish subordinate) or display base coping mechanisms. In SAO's case, the idea that fighting and "dying" to win their freedom is less preferrable than simply existing, or perhaps the allure of the delusion that SAO's world is "better" than the real world for that individual. Even the segregation of players into guilds - tribes by any other term - is some of the basest of human behaviour.

All of this navel gazing however does not imbue Sword Art Online with any great depth, only an interesting backstory and thematic neighbours. With a healthy dose of sexism and general all around lunacy, it's unlikely that the series will be quoting Plato or Hans Moravec any time soon.