I was recently tasked with recreating an existing supplier search for a client; I was provided with a database of suppliers, most of which had been geocoded, and not much else. This scenario is fairly standard when dealing with mapping applications: a user enters in a postcode and the system will return a list of the closest suppliers to that location. The postcode part of this equation is well travelled - the Post Office in the UK will not relinquish the mapping from a postcode to a latitude, longitude tuple without a large outlay of cash (and numerous non-disclosure agreements), the easiest option is to use an external service for this. I opted for PostcodeAnywhere as I had used them before with great success. The latter part of this challenge - the return of the closest database entries - was something that I wanted to try myself as I didn't known when I would get such an opportunity again.


if something is worth doing, then it's worth overdoing
To say there are many different ways of calculating the distance between two points would be an understatement. One which I had used before involved northing and easting co-ordinates from a known point within the UK (usually the centroid or London). Using this meant a smattering of trigonometry would be enough to return a decent list of matches; this always struck me as crude, despite it's usefulness, using an antiquated and subjective co-ordinate system seemed the wrong way to approach the problem. Latitude and longitude are globally recognised and provide a precise way of defining points on the globe - reading up on how they are calculated was the step one. Step two was finding an algorithm that calculated the distance between two arbitrary points. The first one I found was the Haversine formula: simple, easy to follow and easy to implement. Knowing that this formula was based upon the assumption that the Earth was perfectly spherical grated slightly with me - I reasoned there must be a more accurate algorithm. I found this precision in Vinencty's algorithm, it was then I decided to enact a contrived but deliciously fun maxim: if something is worth doing, then it's worth overdoing. 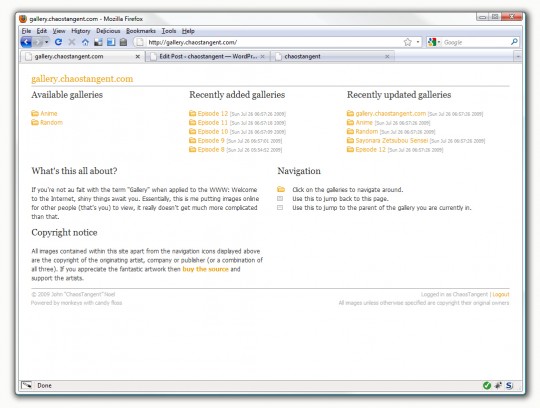 gallery.chaostangent.com is an application for storing and organising images – ostensibly a very simple desire but one I found not catered for by existing web applications when it was first conceived in 2005. The concept was an application that was simple and easy to use while still allowing for a degree of organisation to ensure images weren’t stored in a single “pool”.


With a small, well-defined feature set it seemed like a good time to address some of the issues which had crept in

When I first started developing the application, PHP 5 hadn’t been released for very long and was receiving a mixed reception. Regardless, I started developing using a custom built framework I had cobbled together from scratch – one that would eventually go on to be refined and used in some of my work projects. With the lack of other mature frameworks to compare with, it was rough round the edges and did little more than segment out code into the MVC pattern and even then it wasn’t an entirely clean encapsulation; it was however useful. 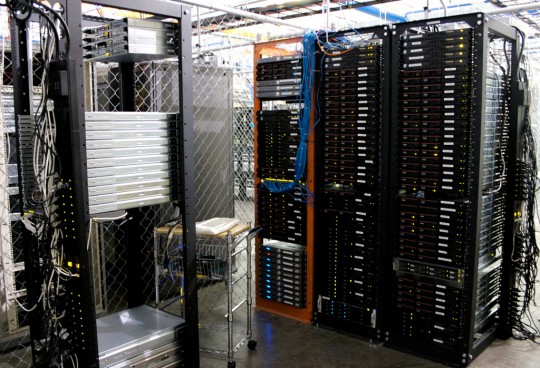 The first part of this series was a heavy on lists and common sense and light on the details. Cacti tend to be more interesting than audits, despite their importance, and the amount of work being put into such a security hazard can seem ill spent when all you want to do is get down and start fiddling. This is what the plan is all about. It marries riotous list-making with tinkering joy.

The first thing I did when the prospect of a new server arose, before looking at prices or stats, was make a wishlist of everything that I wanted. Despite working without incident for so long, there are places and processes where certain aspects could be smoother – this is the case with any computer and having the time to figure out improvements is a rare joy; opposed something breaking and a near-as-dammit replacement is swiftly procured.

The wishlist was split into areas which are a pain to currently work with and areas where it would be good to try something different. The latter is obviously the more contentious – why change if it works – however I always like to try something new for every project, how else can I learn? 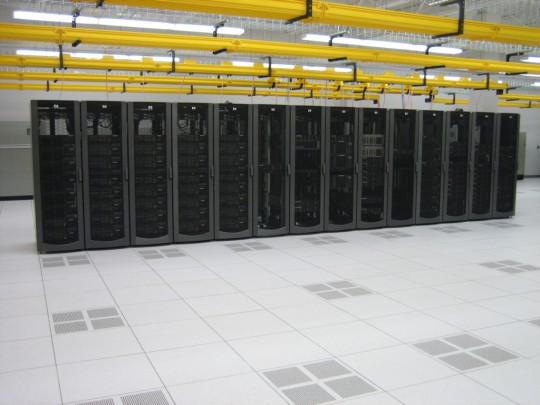 For a small digital agency, running an off-site server is as important as it is unglamorous. You don’t get any of the desirable super-tech of running a cluster but all of the headaches of running a constantly used, high-availability external computer. My workplace’s existing dedicated server (which I championed, configured and maintain) is used to provide web hosting to a variety of clients – both large and small – and for the past three and half years has provided a flawless service. Upgrading is not to be taken lightly and the reasons for doing so must always result in a better service to clients – whether that’s decreased work load for you or improved site responsiveness. For me it boiled down to entropy: three and a half years is a long time for hardware to run and it will eventually fail and make my day/week/month hell on toast.

the more you know and the better prepared you are, the easier it’s going to be
Audit is a filthy word round most parts and conjures up images of bespectacled pencil-pushers or greasy tax collectors. Despite this, documenting what you have is the first step to getting something better. When I begun this process however I found that, like a house, over time a server accumulates clutter: old domains, long since defunct sites, errant processes; automation only goes so far before a cleaner has to step in.

Spending a day archiving and removing cruft is tantamount to dusting the shelves and throwing away old books and furniture before moving house – it reduces the effort required later in the process. My removals included:

After archiving, it was time for the document itself.