The length and breadth of the Lupin III franchise means that any new instalment in it - whether series, film or OVA - has space to rearrange the tried and tested gentleman thief formula. If The Woman Called Fujiko Mine is the first Lupin III entry you’ve seen (and for anime fans of a certain age it will be more likely than not) then it may be odd to move onto the lighter, wackier offerings such as Miyazaki’s well regarded Castle of Cagliostro.

no love lost between professionals

The Woman Called Fujiko Mine, a 2012 series now two movies and a television special in the past, is dark, oppressive and delves into sex, sexuality and sexual violence right from the outset. For better or worse, the series owes a debt to Cowboy Bebop: both share a smooth, sometimes discordant, jazz soundtrack (although Yoko Kanno’s offering is far and away superior), a welcomingly cosmopolitan setting, an episodic structure, and, until it is fully explored later in the series, Fujiko’s past comes off like an homage to Bebop’s Faye. Both series obviously pay their debt to innumerable other genres - film noir being just one - but it’s there that the similarities between the two series ends.

It’s not even worth reading this post if you’re expecting the kind of excoriation that many have lumped on the latest Ghost in the Shell instalments. I’d already set out my stall with Arise when promotional material came out for it and my affinity for Standalone Complex is sparsely documented but well understood. Fifty percent of the expected run-time of Arise is now done with both Ghost Pain and Ghost Whispers out on home video release, it’s interesting to see what direction the series of OVAs has taken over and above the previous powerhouse of Standalone Complex and the two Mamoru Oshii directed movies.

For one this is definitely a divergence from the established lore for all of the characters involved, most of all Kusanagi who was no longer involved in an accident when a toddler forcing her to get one of the first fully prosthetic bodies. Similarly her presence during WW4 where she met both Ishikawa and Batou is in question, yet her position in the military remains. Aramaki is no longer greying and quite as world weary and the Tachicomas that became the Uchicomas are now the Logicomas - same idea different skin.

I’ve been keeping up with Noragami (Stray God) this season and got to thinking about the colour palette used in the show. To my eyes it has a cold, wintery palette without being obnoxiously colour graded (looking at you here GoHands). This is different from other shows set during winter (Mikakunin et. al.) that still manage to stay bright and cheerful, perhaps thanks to luminous hair colouring but that’s an aside. I idly wondered if there was a way to get a high-level view of a series’ colour palette without resorting to wooly adjectives? 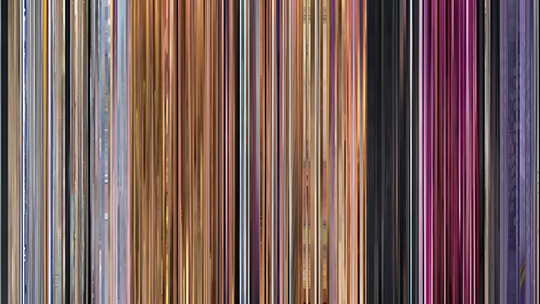 This isn’t to say that you need to wade through episode after episode of dross just to glimpse entertainment - there are plenty of madcap antics and brightly coloured shenanigans to go around. But the emotional and thematic heart of the series doesn’t come until several wishes in to the titular stone cat of the title.

The Dangan Ronpa anime accrues a lot of pop-culture debt during its thirteen episode run. The most obvious being to Phoenix Wright (Gyakuten Saiban) with its near carbon copy of the hyperactive trials, only the iconic “Objection!” being replaced with a bizarre ammunition mechanic. More surreptitiously is its desire to be even a fraction as stylish as Persona 4 with a funky-smooth Engrish opening and questionably bold style. Tertiary influences seem to include the torturous logic diatribes from Death Note as well as the “children versus children” storyline from Battle Royale (and by extension the recent BTOOOM among others).

Combine these with a day-glo colour palette, retro video-game motifs and a cast of charicatures rather than characters and the final presentation is a muddled hodge-podge that, somewhat ironically, barely has an identity of its own.