Common stories are when one plus one is two, a great story (as Ken Burns puts it) is when one plus one equals three. At its heart the quote implies that it's the absurd and the implausible that can change a decent story into a brilliant one. So too is it with Tasogare Otome x Amnesia (Dusk Maiden of Amnesia) which, on paper, could have easily ended up as "My Girlfriend is a Ghost". Instead it's an impassioned love story between a dorky teenager and a ghost over half a century old.

a roller coaster of teen angst and emotions - deftly dealing with love, death and jealously
The series starts oddly enough by bifurcating the first episode: the same events but with a crucial shift in viewpoint between each telling. This is just the first in what becomes a host of extraordinarily brave moves in direction by Oonuma that temper his artisan abstractions of ef - a tale of memories, keeping the series visually arresting but less navel gazing. 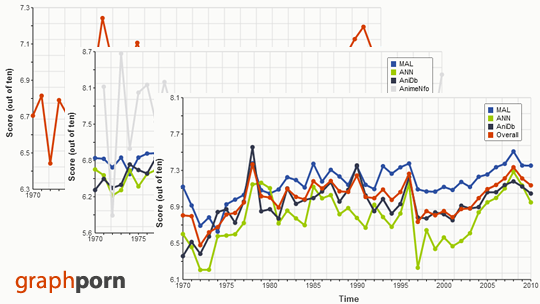 Sometimes blog posts just don't turn out the way you want them to. Whether due to the content or the implementation, they'll often end up smashing through the central reservation of the Good Intention motorway, hurtle down the Mediocrity slipway and end up in Dumb Idea ditch, back wheels still spinning.

the results made for nuanced [...] reading. And when I say nuanced I of course mean dull
My drafts folder is littered with these. Some are just a single word, like the opening to my Final Fantasy XIII review which was simply "bleh"; or they're almost complete and all that prevented pressing the enticing curves of the publish button was a lack of faith.

This is what happened with the firebrand titled "Does modern anime suck?", a post from one year prior which attempted to use Science™ to prove that modern anime doesn't suck and the familiar cries that echo every quarter of a year claiming as such were flat wrong.

That was the theory, the practise turned out to be less than convincing.