The first scene of the first episode of K is an animated slideshow of cast names in English, each set with a different font. It’s definitely an odd way to start the series, given that as a fresh viewer, the names mean nothing, but the lingering sentiment is that, as with the clash of different fonts, this is a series that is fighting desperately for a personality of its own. There’s no question it has style, but rather than having too much of it, it has too many.

There’s the main story, for instance, of Yashiro Isana, a mysterious boy who has been framed for murder. Then there’s the other main story of Mikoto Suoh, the Red King, and his street gang battling against the Blue King, Reisi Munakata. Or the other main story about Kuroh Yatogami attempting to hunt down the Colourless King before he ascends to power, and the relationship he may have with the all powerful Silver King. There’s an awful lot going on but in spite of this, the series manages to be almost unceasingly boring.

The first thing that will probably strike you about Tokyo Ghoul is the opening. It’s a visually stunning minute and half that blends together vast, impossible skyscapes with cracked glass and twisted reflections of the main cast. It establishes this as a series about duality, about masks and, most of all, about the nature of monsters.

That opening is attached to the second episode and had I baulked at the first episodes’ unrelenting viciousness, I would have missed out on what turned out to be a supremely rich and entertaining series. It definitely isn’t my usual fare. Primarily because of that misanthropic sadism that is more or less the entirety of the opening episodes, reminding me far too keenly of clunkers like Elfen Lied or Brynhildr in the Darkness. Make no mistake though, this isn’t just self-indulgent gruesome violence, it has a purpose that goes miles beyond trying to make the series edgy and “adult”.

The only time I seem to hear about this “Maou-sama” chap, the “Demon King”, is when anime subverts that most grand of titles. First it was as a fiercely intelligent but largely benign lady in Maoyuu Maou Yuusha and then here in Hataraku Maou-sama (The Devil is a Part-Timer).

It starts straightforwardly enough amidst war in the high-fantasy kingdom of Ente Isla, all darkness, death and monsters as the beef-cake Demon King lays waste to the once peaceful island nation. Then a hero shows up, starts scrapping with him, only for the mighty Demon King to retreat, warping out and landing in modern day Tokyo with his general Alciel. As introductions go it gets the point across and sets up a series which is surprising not only for how enjoyable it is but also how much it has going on under the surface.

Tokyo Ravens is a lot of things, but one thing it definitely isn’t is predictable. At a macro level at least, on a micro level varying tropes come into play with the characters that are hit and miss in terms of their effectiveness. It’s perhaps not even fair to say its plot is unpredictable; it is insofar as that if you are not paying attention and wholly invested in the story, character titles and lineages then a lot of the series bigger reveals will creep up on you. That investment doesn’t just reward you with predetermination about who is the reincarnation of whom but generally a better understanding of what the devil is going on.

when she isn’t whipping down her hakama pants only for Natsume to walk in right then. Oh how unexpected

It starts out with a love triangle, followed by a death, followed by a “must get stronger” subplot and then a fox girl appears. Harutora’s ascension (and the audience’s initiation) into the super-charged spirit world of eastern mysticism is similar in approach to the underappreciated Tokyo Majin but the blend of old-world chants, talismans and spells with humvees, mobile phones and the Tokyo skyline is distinctly its own. Weave in some psuedo-political intrigue, sedition and the stalwart campus love comedy and you get at least an impression of what Tokyo Ravens has to offer. 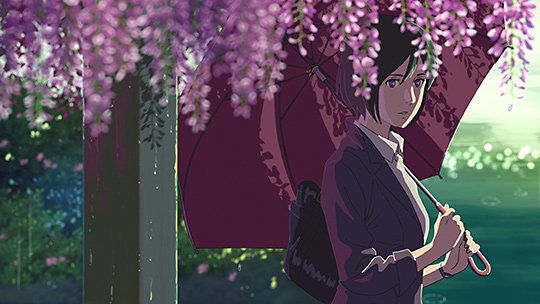 “Hmmmm.” That was the noise I made as the post-credits scene in Makoto Shinkai’s Kotonoha no Niwa (Garden of Words) faded to black. It wasn’t so much a question or even a measure of concern but more a noncommittal sound that seemed to fit with the rather woolly way the petite forty five minute film ends. Ordinarily at the end of Shinkai film, even one as short as Dareka no Manazashi (Someone’s Gaze), there’s a satisfied silence, pregnant with the weight of the story just told and the characters just glimpsed.

Pluviophiles rejoice for much attention is lavished on the rain

A lot of the discomfort with the ending will likely come from what expectations you had going into it - in short whether you’re familiar with Shinkai’s films or not. Certainly you should take each work on its own merits, but the sharing of motifs and style and tone is enough to sink you back into the amber sunsets and cloudscapes first set out in Hoshi no Koe (Voices of a Distant Star).