There are innumerable possible classifications for anime series. There are ones that are unique and one-of-a-kind, ones that could never be bettered or impersonated. There are ones that are distinctive, flourishing because of their individuality. There are genre pieces that may not stand out on topic but do by embodying the best of their genre. There are derivative series that cherry pick the tropes du-jour and throw them together in the often futile hope of producing a hit. Then there’s D-Frag. A series so staunchly bereft of personality, so picked over by committee and with all its rough edges sanded down that it’s difficult to lump any kind of praise upon it beyond “it’s not terrible”.

at its best when it goes completely off the reservation

Not great, but not terrible. A pleasant mediocre. It goes laser like for the apathetic part of the brain that isn’t particularly engaged with any of the characters or events, but isn’t offended enough to discontinue watching. Its a school club love story with a light comedy scaffold with an all-too familiar one guy - multiple girls setup. The protagonist, spikey haired delinquent and chronic screamer Kenji, has been coerced into joining the “Game Development Club” in order to save it from forced disbandment; cue hijinks. 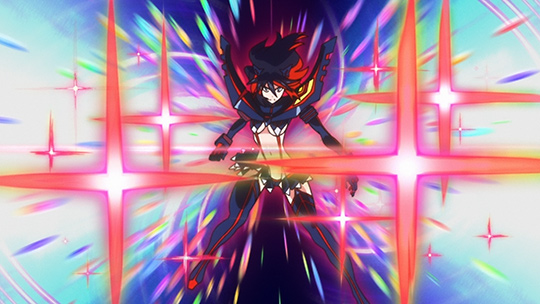 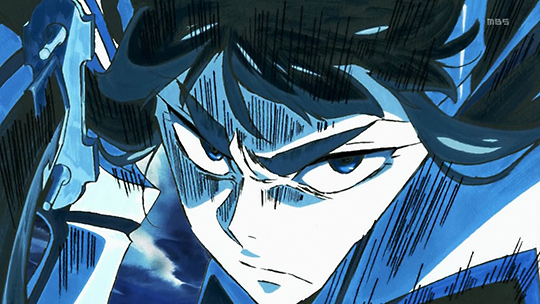 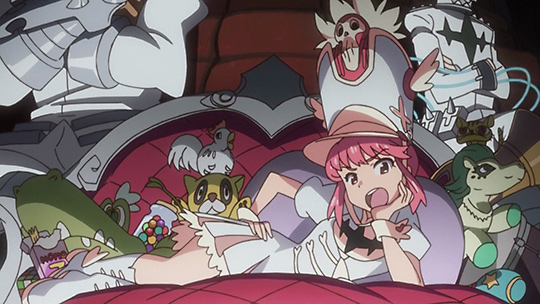 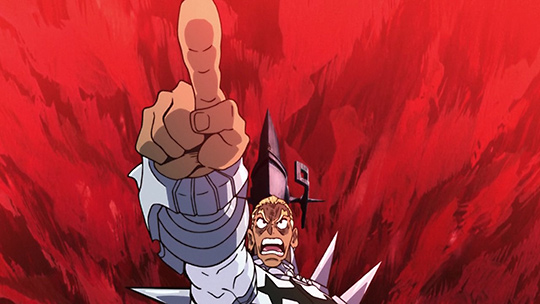 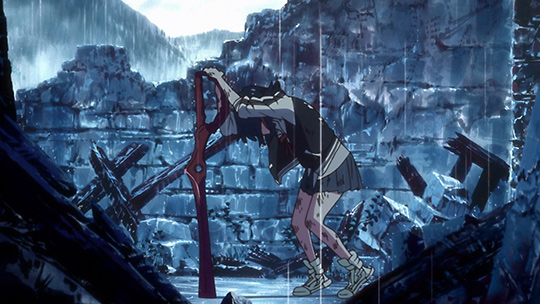 Approaching Trigger’s Kill La Kill critically is a daunting task. It has been a divisive series since its first episode and the scrutiny it has been placed under by fans even now, weeks after its last episode has aired, means that there are so many arguments and debates that there is an unspoken expectation to fall on one side of the fence. Is the series feminist or misogynist? Does it have character development or just caricatures? It is a narrative wasteland or stylistic grab bag? Better or worse than Gurren Lagann?

about chutzpah and indomitable spirit, about magical girls and bondage monsters

That last point is one of a number of elephants in the room when it comes to this series, thanks in no small part to it being plastered over the initial marketing material, sharing the same director - Hiroyuki Imaishi - and a multitude of staff including writer Kazuki Nakashima. Studio Trigger’s inception is well documented, but suffice it to say that the production team and only their second original creative effort after Little Witch Academia means that Kill La Kill started with the most fearsome of challenges: expectation.

The majority of Chuunibyou demo Koi ga Shitai! Ren (lit. Even With Eighth Grader Syndrome I Want To Be In Love, alt. Love, Chuunibyou and Other Delusions -Heart Throb-) is forgettable fluff. The core relationship between recovering chuunibyou Yuuta and incurably afflicted Rikka that came to a head in the first series is the focus this time around and instead of the clear split between light humour and super heavy drama, this second series is almost one hundred percent affable comedy. There are diversions such as a competitive napping contest and a school trip but otherwise this is a by the numbers campus love comedy.

would a second offering be more light-hearted after the first’s rather conclusive ending?

In an attempt to inject some drama into an otherwise undramatic and glacially moving relationship, a friend from Yuuta’s past makes an appearance: the similarly ex-chuunibyou Satone who sports a mane of pink hair and shrill, borderline hysterical laugh that becomes somewhat of a warning siren throughout. She is the only notable addition to a series that was already heavily weighted towards females and the story is content to shed Yuuta’s only other male friend, Makoto, who becomes a lot like YuruYuri’s Akari in being invisible most of the time. When he isn’t wearing the anime equivalent of blackface and being preyed upon by a predatory male classmate of course.

Like many recent two-season anime series, Nagi no Asukara (lit. From The Calm Tomorrow, alt. A Lull in the Sea) is bifurcated neatly at the thirteen episode mark. You could, in theory, leave the series at that point and be content with a competent if unresolved story story of early teenage angst. It would be a huge disservice to how spectacular the series is a whole though, and though you can spend the former half playing “count how many times girls cry” each episode, the latter half exceeds an already beautiful production with a thematically rich and emotionally charged tale of adolescent love in all its forms.

Your eyes are so blue, and your tears look like waves

It’s an unlikely recommendation for a series whose director’s previous productions have included the Inuyasha movies and the woefully unremarkable Gunparade Orchestra. Perhaps not so unlikely though for the writer who is right at home after penning The Pet Girl of Sakurasou and the similarly P.A. Works produced Hanasaku Iroha. It’s also odd to hear myself recommending it when the pseudo-contemporary setting and laser focus on romance and juvenile relationships isn’t my usual fare. But rare is a series that is afforded such startling production values that match a capable story and confident delivery.

Please note: the remainder of this review contains spoilers from throughout the anime series.