I will never be ready to talk at any great length about rape. Although I'm aware of, though not familiar with, the physical and emotional damage it leaves in its wake, there is nothing of value I can add to any discussion of it. This didn't seem to stop the first three episodes of BTOOOM! (three o's) though which handles the past and present sexual assault of one of its main characters with all the deftness and sensitivity of throwing a rotten watermelon against a cinder block wall.

unable to fathom the complexities of a countdown on a small box that explodes when it reaches zero
It doesn't help that the first three episodes of the series have the same kind of misanthropic sadism towards humanity that others like Elfen Lied and Gantz have demonstrated. That humans are corpulent, fleshy bags of bile, hatred and animosity and as an audience we are supposed to feel a catharsis, or at least satisfaction, when they are brutally killed. 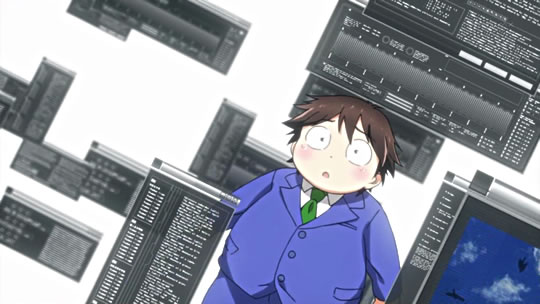 Of all the franchises that crave another series - Ghost in the Shell Standalone Complex, Stellvia of the Universe (well kind of), Moyashimon (wait...) - Eureka Seven was not one of them. The hugely influential original series was Studio Bones firing on all cylinders. A tour de force of storytelling, boundless imagination, confident execution, and most critically a satisfying and conclusive ending. Say what you will about the pacing (soccer episode anyone?), it still stands as one of the best anime series ever made.

Eureka Seven Astral Ocean has a lot to live up to and does itself no favours by starting very similarly to Xam'd of the Lost Memories - an idyllic island community is attacked with terrifying force by an alien aggressor while an aged doctor tries to help. It's certainly a lot more coherent than Xam'd and has echoes Eureka Seven's original opening with the humanoid robot Nirvash careening into the Thurston's garage roof.