If 1.0 was meant to prime the fans for what was to come, 2.0 det­on­ates with mag­num force.
Not just a fresh coat of paint but a fresh take - that was the promise at least. It was hard to get excited, especially when there was also word of a live action Hollywood adaptation bolstered by some mightily uninspiring concept art - the only promise being that WETA are on the case. Regardless, the news came out over a year before the first Rebuild release so there was plenty of time to build up my scepticism. The first movie, "Evangelion 1.0: You Are (Not) Alone" released in 2007, deserves a post of its own and the number of pages I've devoted to notes and thoughts and theories bordering on absurd. The second movie, "Evangelion 2.0: You Can (Not) Advance" released just this summer is easy to write about because I have not yet had a chance to analyse and unpick it as I am wont to do. For want of a better description, this is a review rather than an unravelling.
Now spoiler free!


What is most striking about the movie is how quickly it progresses: the slow methodical pace of the first is gone with two angels are dispatched in the first fifteen minutes with newcomer Mari introduced and series staple Asuka entering in a typically absurdist fashion. The first forty minutes peg the movie as a set up, a careful manoeuvring of protagonists for the inevitable firestorm of the next three movies. This is thrown dramatically aside as the final hour starts up and doesn't stop until the post-credits preview. Ordinarily when anime series are transformed into films they suffer because the typical three-act movie format is lost in a staccato fire of crisis and resolution common to episode content. The first movie managed the transition excellently by making the fifth angel (fourth in the movie chronology, natch) a far more dramatic set piece - helped along by some stunning scoring by Shiro Sagisu. Evangelion 2.0 ignores the tempo set by its predecessor and instead of slow build and release, it mimics modern movies such as The Dark Knight with an extended roller-coaster of a finale. That this movie cuts through vast swathes of the series' story in such a stunning way is testament to its quality. 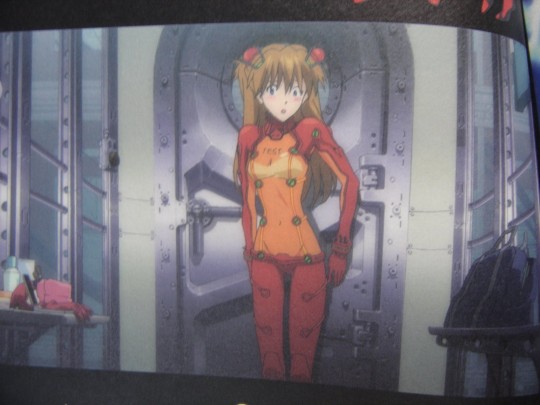 In part though, it is still constricted by the original timeline - while the minutiae of certain events are changed, the ethos and chronology remain. Every scene has been stripped back to its most bare essentials which keeps the wicked pace up but of course loses some of the precipitous depth the series was noted for. For instance: the rivalry between Rei and Asuka is accentuated and condensed, culminating in a iconic scene within an elevator; the series let this silent tension drag out for minutes while 2.0 has no such luxury. This isn't a desire for more budget-saving static shots, but more a desire for the characters to be able to breathe - Evangelion has a sizeable cast with a lot of history and the danger with both the pace and the movie format is that they're not allowed to expand and instead just become catalysts. Shinji has already grown into his role as has Misato and to a lesser extent Rei, but the deluge of Asuka, Mari, Kaji and Kaworu threatens to drown existing characters. The converse of this is how much texture is now given over to the world, especially Tokyo-3 which, now given the budgetary freedom, feels like a real city bustling with people and vehicles; elements which were shown without context before such as the NERV pyramid are made more tangible and given edges rather than remaining painterly backdrops.

Visually one cannot find fault, the cryptic opening with Mari is swift and brutal, set pieces like the climactic Geofront battle are sweeping and epic while incidental details like Misato's hand movements are given love and attention - it all adds up to a spectacular looking piece of media and the inevitable high-definition release is all the more enticing. Of course, GAINAX being GAINAX means a propensity for jiggling breasts and casual nudity even during otherwise deathly serious moments, time is given over to the curves of the female cast. Although curves have certainly not graced Asuka who initially resembles a bobble-head figure with what first looks like a slightly oversized head but is in fact a severely fleshless body: stick thin arms and legs and a torso that seems too petite to ensconce vital organs yet just enough to keep her lamentably sizeable chest attached. The score, while still universally excellent, has some questionable points usage. The use of classical music continues from the series with some evocative re-recordings as well as brand new movements to accompany equally stirring scenes - unfortunate then that the decision was made to use a floaty, child-like song for two of the most traumatic scenes. The juxtaposition is as jarring as was intended, but when "Angel of Doom" rises in the climax of 1.0, it is disappointing to be treated twice to something that is by comparison sub-standard, especially when the barn-storming "The Final Decision We All Must Take" promised so much on the soundtrack release.

If 1.0 was meant to prime the fans for what was to come, 2.0 detonates with magnum force. Given my history with the series, I cannot be objective about the movie, I cannot envisage what people who have only seen these movies view Evangelion as; I carry over twelve years of baggage with me and from that view, "Evangelion 2.0: You Can (Not) Advance" is an absolute stonker of a film. It walks that line between pandering and reimagining with aplomb, gripping beyond its run time there are few words I can find to express my abject joy when watching this. The myriad possibilities of every deviation from the canon, every glimpse of worlds not seen is enough to occupy me for weeks. This is my new obsession.