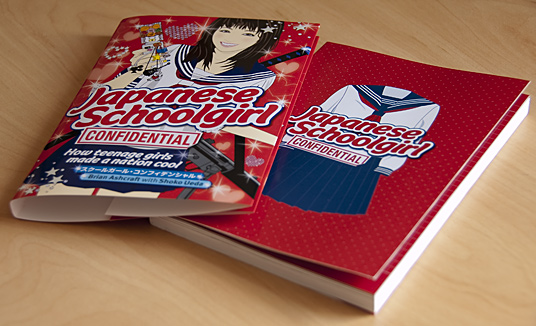 Coming from the husband and wife team that includes Brian Ashcraft of Kotaku and WIRED fame, Japanese Schoolgirl Confidential charts the rise of schoolgirls in Japan from background to brand, exploring the details and influences that surround them. Printed in a stubby, easily held format, the book is littered with photographs and illustrations that support the content, but is also adorned with a variety of kitschy, gaudy paraphernalia like faux-diamond bordered hearts as image captions and heart stickers in the corners. The format is fitting for the subject matter, keying into the peppy and sparkly façade, but completely at odds with the variety and veracity of content that the book offers from start to finish. The level of research, care and attention that has been put in is gratifying for a book that could easily have been as vapid and frivolous as one assumes the eponymous schoolgirls are.

The greratest triumph of the book is in debunking that mentality: that the schoolgirls, decked out in iconic sailor-suit school uniforms, are a product carried by a society that has a borderline hysterical lust for cute characters and intense consumerism. Subverting that impression to show the girls as drivers behind many of the sea-changes that happened in fashion and product development to moulding gender issues is cleverly done and achieved through example more than a stolid recounting of facts. The book is divided into eight chapters that begin by covering the history of the most obvious trait - the uniform - then moving on to idols, film, magazines, art and wrapping up with video games, manga and anime.

It is testament to the writing style and structure of the book that it can be devoured so swiftly with each subject naturally leading to the next. The different approaches taken, whether interviews, event coverage or just simply diving in and going from there, means that while finer grained details are left out, the core message of the book is never far away. This is about a modern phenomenon that only over the last thirty or so years has become prescient and it naturally deals with modern concerns such as the relationship between youth and nostalgia, sexual issues such as compensated dating as well as the voracious uptake of modern technology. 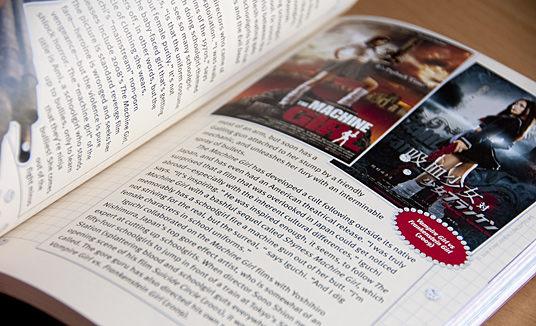 The book's greatest strength is not in the individual details which are left as exercises for the reader to investigate, but in drawing together all of the disparate elements surrounding the phenomenon. Anyone who has been glancingly exposed to Japanese culture would be hard pressed not to find something familiar here, especially so in the anime and video game section which will no doubt be nothing more than retreads for many. But the connections drawn between all of the different pieces prove invaluable, the idol section especially is a goldmine regarding Morning Musume, AKB48 and their predecessor the Onyanko Club. Similarly the film section links together past and present schlock horror productions with big-budget powerhouses such as Battle Royale and Kill Bill.

Odd then that the book's most glaring omission is that of a conclusive summary, stopping abruptly after the anime and manga chapter and shooting straight into the bibliography and index. It reflects the book's pick-and-mix mentality, the belief that perhaps if a reader isn't interested in the art of Makoto Aida or Akane Koide they can skip over it, consuming what they see fit rather than reading cover to cover. The constant reiteration of terms also reinforces this with repetition of colloquialisms and key terms which were thoroughly covered in prior chapters. This is a shame when the writing is fluid and encourages extended reading with stand out chapters on fashion and the history of the uniform, making reference to real life events and locations and subsequently feeling more personal and story-like than the others.

Perhaps through prior exposure to Brian's work, the video game and anime chapters seem the most intensely researched and the most prone to a more conversational style. The little asides such as "...and added things like the ability to go shopping. Yay shopping." are brilliant to read and add some levity to, what is on the face of it, a rather absurd topic. It's easy to read into why there aren't more of these when it risks trivialising an already transient subject and what's present is already jaunty enough without further editorialising.

On the whole then it's good to see a straight-faced, judiciously light hearted take on a subject that hadn't been covered in such coherent and extensive detail before. By its nature the subject and subsequently the book ends up feeling superficial despite the obvious research poured into it: covering pop-culture, manufactured bands and designer fashion; however the format and tone are savvy and self-knowing in that regard and to its credit, never comes across as vacuous or boring. A keen starting point then to a topic which would do well to see further scrutiny.