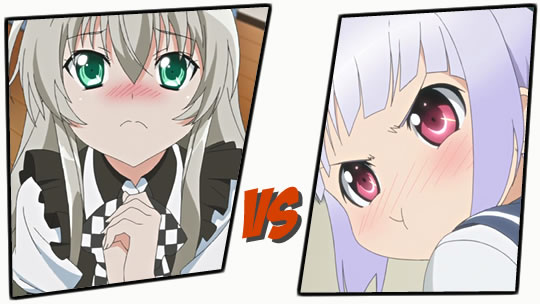 Anthropomorphisation in Japan is a time honoured tradition and part of its global exportation of "cute". Some view it with indifference, others disdain. In anime culture it has a long history beyond the days of "OS-tan" with different females representing the different available computer operating systems. Nowadays you'd be hard pressed not have had a run-in with such characters: trains, browsers, planets and vehicles to name but a few have been transformed into anime characters or, to use the vernacular: moefied.

This season of anime has popped up two shows notable for their anthropomorphisation: Haiyore! Nyarlko-san and Upotte! The former taking creatures from the stories of H.P. Lovecraft, the latter guns from the around the world. So in an attempt to compare apples to oranges:

Girls with guns? Sure. But guns as girls with guns? There's no context given as to why this is (not even "a wizard did it") or why the girls wield the weapons they're supposed to anthropomorphise. There's just the rapid realisation that with the same company and character designer as Ladies versus Butlers, Upotte! is not just gun pornography but actual pornography.

It's the same same tasteless smut that typified LvB and Kanokon: the "are they really being that blatant?" category of brain-dead drivel. What little charm there is in the first three episodes comes from the interstitials that explain the histories and usages of the various weapons and the twee position of sub-machine guns as pre-schoolers, machine guns as middle schoolers, rifles as high-schoolers, making the top-heavy female teachers missiles?

That it takes two full episodes before an inappropriate and voyeuristic bathing scene is frankly amazing but sadly demonstrative of the overall lack of imagination shown beyond the initial concept of anthropomorphising military weaponry. Sure gifting the girls personalities that fit their usage is all well and good, but like Strike Witches or any geographically aware show, the Brit is shown as a ditsy, busty and ripe for sexual harassment, while the American is brash, blonde and meddlesome.

Like Nyarlko-san then the source material - in Upotte's case several decades of weapons development from around the world - is plundered for the most promising morsels in order to inject some life into an otherwise staid setup. There are attempts at education, but fundamentally this kind of fetishising of guns could not exist in such a twee and matter of fact way without trivialising their purpose and usage. Sure it's discomfiting to hear a girl, who is also a machine gun, talk inappropriately of a teacher's hands, but it's far more disconcerting to see pupils running around a school shooting at each other without care or concern.

As if Lovecraft aficionados needed another reason to be upset, the protagonist from this series is Nyarlothep, the Crawling Chaos, the soul and messenger of the Other Gods, he of a thousand other horrific forms. A chittering, silver-haired, hyperactive girl with all the menace of a Yorkshire Terrier and a psychotic devotion to a dullard protagonist. Hardly something that would bring ruin to the Earth.

There is an obvious reverence to the original stories with accurate depitctions of lesser gremlins like Night Gaunts, mention of the lesser known Dreamlands and even promoting a post-Lovecraft deity, Cthuga, to a main character. Obviously as an aggressive, laser-slinging lesbian rather than a unearthly ball of flame, but that's neither here nor there. It's indicative that while the deities are ripe for the picking, the bleak cosmiscism that separates Lovecraft's fiction from other horror isn't.

That's no bad thing coming from an overly wordy and nihilistic writer but while one could argue this is but one interpretation of his stories, each is should pay homage and not just lip service. Without pitching humanity as utterly insignificant your're just left with a vaguely entertaining light comedy.

That's more than can be said for Upotte! then with its humourless setups and noseless, barely-teen cast just waiting for DVDs and Blu-ray to liberate them from steam. The first three episodes of Nyarlko-san at least have an Egyptian Pharaoh being labelled an underwear thief and the ominous city of R'lyeh recast as a Golden Saucer-esque amusement park for creatures most foul. It could certainly have pandered to its source inspiration and its attached fans more judiciously but then the juxtaposition of nameless terrors with a crowbar-wielding teenage girl is enough to stick with this scatterbrain series at least a little longer.

In a world of choice a consumer never has to be satisfied with just one of many. Here though in a face off between Upotte! and Haiyore! Nyarlko-san, no one is a winner. Upotte is certainly truer to what it is anthropomorphising and the addition of more lecherous elements may suit gun aficionados more than not; Nyarlko-san then is the better show but neither succeed in being enjoyable outside of their vanishing small niche. Even then military and gun fans would likely find better and more faithful material in Jormungand and Lovecraft fans would be better off avoiding Nyarlko-san altogether.

In conclusion then, between apples and oranges, the best fruit is by far the kumquat.

I'm in too. Nyaruko is a delight. And it's fun how the show manages to blend the serious and the not serious in its homage. Also how it conveys 'insane' given how many things in Lovecraft's world that seemed to damage people's sanity. It's the best take on Lovecraft since Tales of Plush Cthulhu.

By the way, I think that what she wields is more typically known as a cat's paw.
I'm a Lovecraft fan. I've read all his stuff and Call of Cthulhu, Trail of Cthulhu and Arkham Horror are some of my favorite games.

I love Nyaruko. I think it's a hilarious take on the Mythos.

The image of Nyaruko annoying HP Lovecraft so much that he writes her and the rest as horrific beings is hilarious.

Also, 4chan /tg/ seems to have recieved Nyaruko well enough. These guys are fans of Cthulhu and Cosmic Horror in general. Then again, it's 4chan.

Thread related:
http://suptg.thisisnotatrueending.com/archive/18640517/
@omo: That sounds like the beginning of product testing for "I can't believe it's not Lovecraft".

Despite reading a lot of his stories, I certainly can't claim to be a fan so I might be completely misrepresenting Lovecraft fans here..
I think Lovecraft fans might like Nyaruko-san. This demands a real, emperical test!