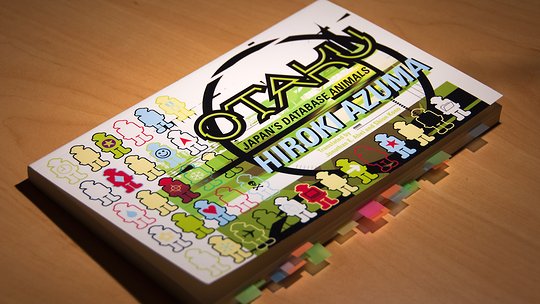 The opening chapter of the book beyond the introductions puts the term otaku into context and introduces the word used most frequently: postmodernism. Before reading this book, I applied the shortcut of using "postermodern" to mean "pretentious" to anyone who uttered it, here though it's used as shotcut on refering to the period during and after the 1970's when consumer-culture really took hold. "Modern" (in contrast to Postmodern) Japan is only mentioned briefly as the post-World War 2 period of rapid industrialised growth.

It's the opening chapter where the author makes his first bold claim: that otaku as a phenomenom are due to American-style capitalism and Japan's unequivocal defeat in WW2. The former of which replaced "traditional Japanese values" while the latter spurred unchecked economic growth, giving rise to what Azuma argues are the conditions for otaku to thrive.

The "Database" part of Azuma's title then comes in the second and meatiest chapter of the book and, like the split between modern and postmodern, is argued as a divide between the grand narrative and the database. It's an abstract concept not entirely helped by the crude (and sometimes mislabelled) illustrations dotted around the book compounded by the definition of each becoming more fluid as you read further.

The best explanation is the one first encountered though and compares the sweeping "Universal Century" scaffolding of the original Gundam series to the piecemeal cannibalised stories of nowadays, when even a twenty six episode series is considered downright luxurious. This from a book originally written in 2001 at the vanguard of the now endemic moé boom. The thrust of the argument is the "database" that supplanted the narrative (with an anarchic period of teething in between) is composed of moé tropes - ditzy, mysterious illness, antenna hair, desu etc. - and anime cherry picks from them when creating new works.

This is the other side of the argument and the one that is the most persuasive: that when these elements are recombined and remixed they do not creative an original work, but nor do they create an inferior copy but a new, different state: the simulacrum (from Jean Baudrillard's Simulacra and Simulation). Again Azuma's first demonstration of this concept is the most convincing: were a sticker set to contain 772 stickers and someone copied one of them, the copy would be worthless. However if someone created a 773rd, maintaining the ethos of the original 772, it is argued that the 773rd has as much "value" as the others. This is where doujin, fan-fictons and fan-art slot in whereby straight copies of works would be worthless, but new stories, erotic or otherwise, are afforded value as events like Comiket give evidence to.

"What is sought here is not the narrative dynamism of old, but a formula, without a worldview or a message, that effectively manipulates emotion."

These two elements - the database of moé and the strata of simulacra around it - fulfill the primary drives of otaku: the ability to deconstruct and organise a new work by referencing the perceived database of different elements, while allowing for a work to be expanded and built upon outside of the original author. Even that concept, "The Myth of Authorship" whereby a creator (either company, group or individual) has complete creative control over a work is rendered ephemeral; think of creators who in the 70's and 80's defined their time period (Yoshiyuki Tomino, Katushiro Otomo, Mamoru Oshii, Osamu Tezuka) whereas nowadays creators, if they are known at all, it is for how they deliver the familiar (Akiyuki Shinbo, Goro Taniguchi, Hideaki Anno).

However this can lead to some odd situations. Highlighted in the book by DiGi Charat but is perhaps better demonstrated with the Vocaloids as characters who exist without a backing narrative but are accepted and eventually gain a history and personality beyond their aesthetics. It's telling that both DiGi Charat and Vocaloids are the fictions of marketing teams but the situation becomes even more Machiavellian when something like Genshiken's Kujibiki Unbalance is considered. A metaseries (itself within an otaku metashow) designed to highlight how otaku consume anime which then became an anime series itself.

Come deeper down the rabbit hole though when you consider franchises like .hack which no longer adhere to the idea of having an original medium. Games, books, manga and anime all tell different stories with not one author being definitive. 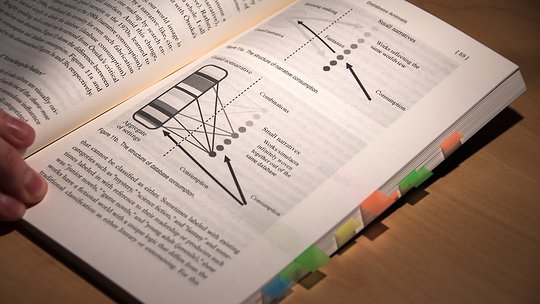 As with roads and Rome, it isn't long before the academic citadel of Evangelion is breached. Once again held up as a singularity for anime, but in this case when otaku made a series for otaku from the burgeoning database of moé elements. If that sounds a little like an otaku Escher painting you're not far wrong. GAINAX, long since known as the anime company founded by and for otaku (see also Otaku no Video) made a series that was an amalgam of constituent parts (giant robots, love comedy) but targeted at otaku. The most telling scene being from the divisive final episode and the infamous "Rei running with toast" vignette which was supposedly inspired by a recently released Evangelion doujin. Add to that the supposed otaku mindset when it comes to supplementary merchandise like the Ayanami Raising Project which, if Azuma is to be believed, are on the same creative level as the simulacra such as fan-fiction and doujin.

Here the argument begins to feel less than robust - where hyperactive marketing and the otaku mindset intersect. It fits with the theory that otaku are born from capitalism but it changes the argument from a largely positive one on creative habits to be slightly more tawdry. This is where the "animals" from the title fits in and, like all the other theories in the book, concerns a split.

In this case it's between humanity and animalism; the former identified by railing against the status quo whereas the latter blindly goes along with it as if by nature. To confuse matters the author switches between the terms "humanity" and "snobbery", the latter more evocative of the type of mindset the term engenders but burdened with negative connotations. From a shakey argument to a wooly one, the final parts of chapter two dip heavily into other psychological studies on otaku and though likely more revealing for those familiar with the works (many of which are unavailable in English), the thread at times became too abstract and too meandering to follow. 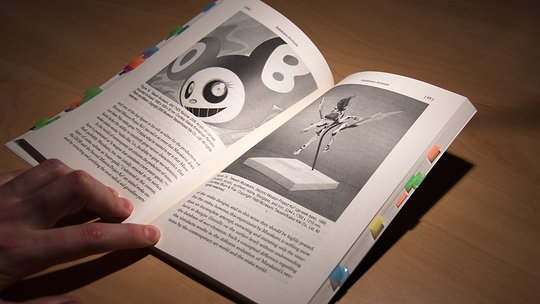 An attempt to rectify this in the final, rather half-hearted, chapter concludes the book on a mixed note. Trying to put some of the concepts explored in the previous chapter into concrete examples comes across like an old man fumbling with unfamiliar computer equipment: torturous but slightly amusing. This is perhaps due to my background but trying to describe the construction of a webpage as similar to the database/simulacra or meaning/representation split seems misguided and needlessly obtuse.

Much better is the critique of a complex visual novel, Yu-No. The core conceit of the game being to bed all of the girls (obviously) but it contains a sub-game of switching between different branching routes and retaining certain objects in order to unlock the "true" ending. As it is described, the individual routes with each girl are the simulacra - the same constiuent parts but different representations - which makes the game as a whole the "database". A perceptual level above this is the need to complete all the routes to unlock the final ending, enabling well-known otaku behaviour with these games but keeping it within the game world; while a step above that is decompilation of the game to find out how best to accomplish 100% completion.

"A novel game can never be a multiplayer game"

It's a clever analogy and feels like it should have been woven into the meaty second chapter rather than relegated to the final pages; it certainly would have made a change from being budgeoned with the constant bifurcation of ideas e.g. modern vs. postmodern, humanity vs. animalism, database vs. simulacra etc. Compared with Beautiful Fighting Girl however the book is downright lean, this despite Azuma taking a literary swing at Saitou calling his argument on otaku perversion"circumlocutory".

Sexuality though feels like the missing piece of an otherwise well-reasoned theory. The author very rarely passes judgement on otaku and their habits, but at the same time doesn't deal with the hyper-sexuality present in many of the games, anime and light novels that form the spine of his idea. Perhaps the biggest issue I have with the database theory though is that it is never revealed how new elements, new moé attributes, are added, implying that this either doesn't happen and all works are thus derrivatives (naturally making them inferior) or it happens somewhat naturally, perhaps evolving with tastes or style.

More crucially though it feels like Azuma is arguing in the same vein as evolutionary biology and psychology, specifically the tautology "it's that way because it was made that way". Alluring because it feels effortlessly and comfortably right, but here it isn't subject to scientific or even anecdotal verification while also not dealing with anomalies or outliers such as Kenji Kamiyama as an example of a supremely popular narrative rather than database driven creator. 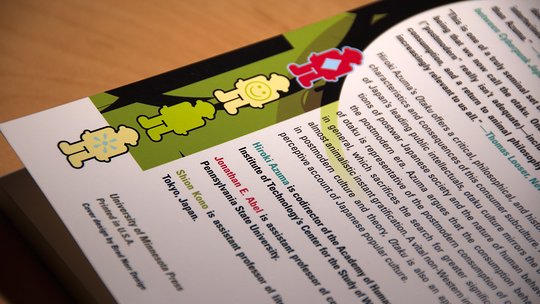 As a book then, Otaku: Japan's Database Animals is hard to fault: slim, focused and although challenging, largely accessible to non-academics - befitting of Hiroki Azuma's popular standing in Japan. As a theory though, this is only part of the discussion. It is a meaty, smart and wide-ranging part, taking in visual novels, online image sites such as TINAMI (Danbooru's progenitor), the proliferation of light novels and anime (though wisely not manga), but only a part all the same. As with Beautiful Fighting Girl (whose ideas this intersects in several key areas) it is disappointing that any subsequent material remains untranslated and outside the reach of all but the most dedicated of Japanese as a foriegn language students. Regardless this is a landmark and thought provoking book and still remarkably prescient despite being over a decade old.