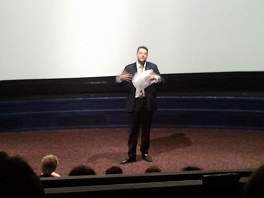 Following up the critically acclaimed and astoundingly brilliant The Girl Who Leapt Through Time was never going to be an easy prospect but with a timbre shift sure to cement Mamoru Hosoda's role as a world-class director, Summer Wars proves to be a worthy successor both creatively and aesthetically. Taking the fluidity Madhouse gifted his previous film with, the animation is dialled up until innumerable characters are all raucously moving at once - breathing, laughing, talking and living on screen. Pomp and flair help avoid the stereotypes that so often go with virtual-world stories and though it still degenerates into a touch typing marathon, the excitable charm it displays throughout elevates it from the standard, tepid blockbuster fare.

Kenji is asked by one of the prettiest girls in school, Natsuki, to help with a summer job; unbeknownst to him however is that her grandmother is soon to be turning ninety and Natsuki has told her family about a fictional fiancé that he must now assume the role of. Travelling out into the countryside around Ueda, he is introduced to the bustling, varied personalities of Natsuki's extended family and the palatial house and grounds that have belonged to the Shinohara clan for generations. In the virtual world of OZ however, a malevolent entity is wreaking untold havoc - shutting down vital utilities and gobbling up user accounts with nobody able to stop it. Inconvenience is only the start when it transpires the entity has a close link with the Shinoharas and it may only be Kenji, Natsuki and other members of the family who can stop real world devastation from occurring.