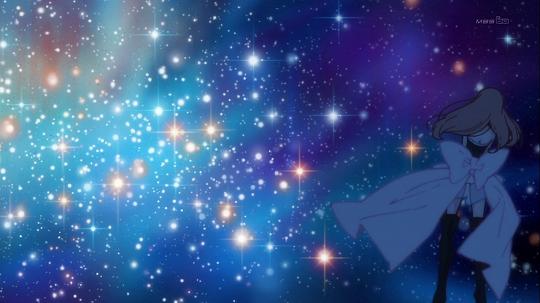 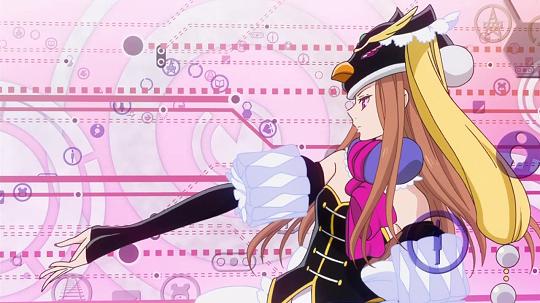 Bland indifference then. A sharp contrast to the expressiveness shown aesthetically with a keen eye for colour, saturation and light as well as recurring totems such as trains and paths.  Scenes are deftly put together and rarely is there not subtext: three small cats led by a larger one, one character always following a red line or path, circles and apples, snow and glass.

It all starts so promising: a rasp on the heart-strings at curtains up, a resurrection, then some light hearted playfulness with the penguins. What could the rest of this fairytale possibly hold? A psychotic school girl stalker, a love triangle and a teddy-bear bomb plot. By the end, Himari (chronically timid) has died and come back to life so many times she rivals many comic book villains. Her brother Kanba meanwhile has not so much turned to the dark side but swan dived into it and her other brother Shouma continues to whine. Constantly. Slightly disturbing then that the mentally unsound schoolgirl Ringo becomes the unlikeliest safe bet.

Her reality, in a series of colliding character microcosms, is drowned and ephemeral like the filigreed visions of pop-up theatre she has. Her name but another Adam and Eve and Snow White allusion. Lost since the break up of her parents and the death of her sister, she clings to the ineffectual Shouma once the pesky business of her borderline illegal stalking of her teacher Keiju is forgotten. 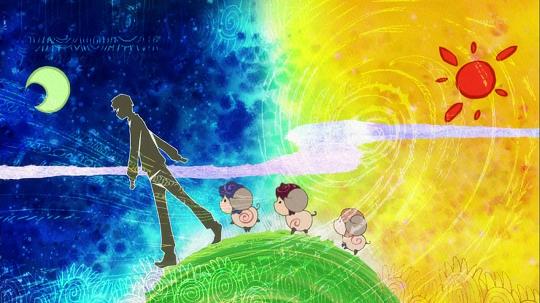 Her sister Momoka is the story's saviour figure, replete with dying for others' sins, mystical absolution and undeath. Often referred to but rarely shown, she is left as an affecting enigma, while her diary ends up a Macguffin, a blender for the otherwise disparate characters rather than meaningful device.

The protagonist trio: Kanba, Shouma and Himari Takakura never gel as a believable family - synthetic or otherwise - and seem to orbit around one another, absorbed in their own worlds. Their back story is told through fractured and chronologically confusing vignettes but eventually reveals itself as absurd as the other characters - only more involved. Himari is always shown near shattered glass, as if her position as the pure but sickly object of affection was ever in doubt. Kanba meanwhile rarely strays from the red path, his hauntingly titled Scorpion's Soul revealing itself with the declaration that he would raze the world for Himari. A beacon of emotion when compared to Shouma's constant background noise of whinging.

Perhaps most sinful of all is Keiju and Yuri's lack of place in the story. Cyphers to the end, their hollow marriage does nothing to further or enhance the story, and worst of all, protracts it. Keiju's kidnapping of Himari is a rare trespass upon the main story but one which could have easily been filled by a nameless passerby - hopefully without the tedious monologue. That he is ignominiously cut down by a glassy eyed actor from Yuri's troupe is a small favour long overdue. 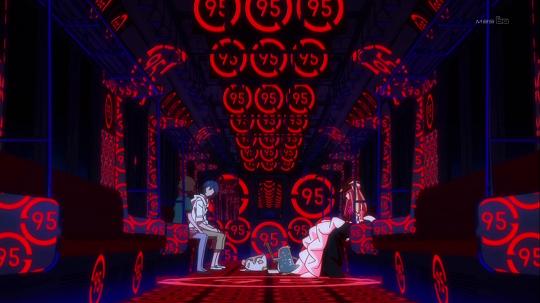 As evidenced there is much to discuss and pick over and, like American TV show Lost, it encourages a meticulous attention to detail and weekly dissections rather than a more general purpose enjoyment. Here there is a definite structure rather than confused waffle, but characters and story begin to play second fiddle to the increasingly heavy handed symbolism. There are potent flashes of emotion, when all the visual double speak gets out of the way and enhances rather than overtakes the story. But these are lamentably infrequent and the bleak portrayal of families and parents sets back in all too swiftly.

To its credit, there is a finality to the denouement despite the almost entirely abstract nature of it - more episodes 25 and 26 than End of Evangelion. Some will shout out in glee that their prediction at some earlier episode was correct, others may scratch their heads and wonder whether Sanetoshi was Kanba's father, or why the child welfare system was given the dubious title of Child Broiler, or whether there is an undercurrent of incest with Kanba's clinging to Himari's naked visage.

Regardless, the series deserves its devotees. Those who can overlook storytelling deficiencies (and misunderstanding of slingshot usage) for one more watercolour folk-tale of dubious relevance. Too often anime series are little more than illustrations on the cheques of merchandise peddlers. Here, there is thought and care applied to every scene and word, and it poses complex and interpretive questions. On the way though it loses grasp of enjoyable storytelling and characterisation: attention attrition opposing pleasurable entertainment. For once then, a series lacking only in writing coherence rather than direction, imagination or budget.

@Martin: You're right, it's good that the show has energised people into examining the series and the questions that it asks. It was definitely an enjoyable ride but one that I felt a lot of others were enjoying more than me. The series is I feel overall a net positive with all the good things it brings and there needs to be more like it, but perhaps with more of a balance.

@Avy: No arguments from me, I am solidly in the camp of "story and characters trump all else", so having the symbolism take the fore was slightly disappointing for me. For others it provided more meat to pick over and enjoy which I have no problem with, just not what I look for.

You're right re: without symbolism there's no charm, much of the visual and storytelling style of the series would be lost. I think perhaps the best parallel I can draw is between the first and second Ghost in the Shell movies (by Mamoru Oshii, not the Standalone Complex ones). Both are great movies, but the first could be enjoyed without digging into the transhumanism and philosophical undertones, the second on the other hand needed those aspects to be understood and internalised to get the majority of enjoyment from it.

Symbolism as a device isn't bad, but when used to excess - as I think it was in Penguindrum in the latter 1/2 to 2/3 - it becomes unwelcome. As I mentioned above, overall the series is creatively very positive, and it's maybe a big ask from myself for what is a supremely hard balance of different elements, but one can dream.

Thank you for your compliment, I'm hoping my work and personal lives will calm down somewhat in the new year allowing me more time for writing and posting, it's what I love doing. Unfortunately, it's a case of "wait and see" at the moment!

Thanks both for your responses!
To me the overabundant symbolism is what hindered the story more than anything else. Almost too frequently the symbolism became so oversaturated that it made the story indigestible and vague. It’s not that the symbolism was difficult to identify, decipher, or comprehend (although at times I failed a few of those categories) but it was so abundant and dominating that it indeed stole the spotlight from everything else and shifted the story to a lower peg. This is evident in the discussions you mentioned and in Martin’s comment above. So on that point, and virtually every other point in this post (not relevant to this comment), I agree with you.

But where I disagree with you is on the negativity toward the symbolism. The excessive symbolism is what made Penguindrum and it is the explanation why people enjoyed it as much as they do. Everywhere you look, people are debating various theories and contemplating what they observe and, if you scratch behind the surface, you’ll see some cautiously researched subjects out there. If you go back to the point I made in the previous paragraph, the one how the symbolism overtook the story, you see how the symbolism is what everyone wants to examine and discuss. Without this symbolism, much of the charm of the series would simply be missing and we’d be left with a somewhat perplexing and inadequate story.

I understand where you’re coming from though on this matter that the story is fundamentally more important than any symbolism and the story is the most vital aspect of an anime to you (I think?). If anything detracts from the story, which the symbolism did, then it should be viewed as a negative. I’m not trying to prove you wrong here since you have valid reasons on your interpretation and perspective on Penguindrum but I felt I needed to voice my thoughts on the matter here. You care more about the story than I do so obviously you see the symbolism as a negative whereas I see it as a positive, even if it did indeed destroy the story, it did so for the anime’s benefit. I believe this is the reason why I enjoyed Penguindrum more than you (or at least from how you sound coming from this post) and why I disagree with that point (I hope that was an objective of this post).

Once again, I’m glad to see you pen another magnificent post and I hope this increasing frequency of updates is a sign that you’re securing more time to spend on this blog. Do you think you’ll have more posts in the near future and into 2012?
Once again you hit the nail on the head. For instance, this:

"...a series lacking only in writing coherence rather than direction, imagination or budget."

I've just finished the final episode (tellingly, watching this series was always accompanied by a beer; when I watched it sober it wasn't nearly as satisfying) and this was my impression too. I could list the things about it that were interesting, inventive and fun but the sad fact remains that it was flawed as well.

I still look upon it fondly but despite its quirks, not because of them. Even though it was glaringly deficient in some areas, it surprised me, got me emotionally involved and made me *think*. Every week I'd read theories, observations and speculations about what it all meant; some turned out to be right, others not. The important thing was that at the time, we enjoyed it and yes, it made us stop and think about what we were seeing and hearing.

Even when a production isn't perfect, as long as it encourages thought and feeling it's at least a partial success. Beyond that, I still don't know what my final opinion on the series really is.