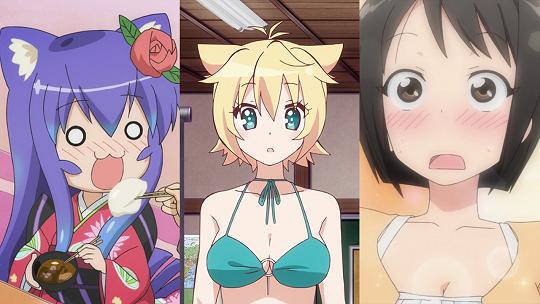 “Ugh, nothing happens!” is one of the oft uttered arguments against contemporary, character-led light comedies or, more colloquially, “slice of life” series. In a sense it is largely true; nothing burns, dies, transforms, flies, barrel rolls, crashes, magically disappears, is chased or otherwise suddenly explodes in slice of life series. It’s an argument that’s largely missing the point though, for as mercurial as the definition of “slice of life” is, the focus is largely on presenting an exaggerated take on the mundanity of everyday life. This is to say nothing of the contentiousness of the phrase and its taxonomic convention, carrying as it does aging volumes of discussion, regardless of the term’s demotic usage.

Three recent (ish) anime which typify the spirit, if not the minutiae, of the term include Acchi Kocchi (Place to Place), GJ-bu (GJ club) - both of which peer into the lives of middle/high-school students - and Servant × Service (or to give it its full title Servant × Service ☑) which deals with the rarely seen world of an entry level Japanese government employee. It is perhaps fair to say though that the success of such a series largely relies upon the personalities of the characters and the ability to keep either the comedy or the drama fresh enough across its run.

It’s definitely a crowded area though, and that’s without delving into more specific terms such as “school life” or entertaining modifiers like romances (Toradora, Kaichou wa Maid-sama!) or off-the-wall comedies (Nichijou, School Rumble, Minami-ke) and that’s without mentioning titans like K-On! that loom over all. Regardless, standing out is no bad thing and Acchi Kocchi at least manages to largely through a smart, bold visual style that permeates the whole show.

Smooth-cornered arrows punctuate every scene and wild train of thought while the chunky, super-deformed character designs complement the pointilised background cast. Even just under two years after it was first shown, it’s unique and contrasts the rather bland presentation from GJ-bu and, though it pales next to the stellar Servant × Service opening, the breadth of its usage trumps the other two shows. That doesn’t necessarily make it a flawless watch though. Sporadically culturally aware - even going so far as a Daigo / EVO2K4 reference in the first episode - it borrows heavily from Lucky Star with traits and situations plucked almost wholesale from the 2007 series. It also relies heavily on a “aww how twee” response to almost every scene, the majority of which involve the central unrequited romance between Tsumiki and Io, a structure that rapidly stales.

Inverting that setup - going from fawning girl and clueless guy to smitten guy and reticent woman - is what underpins a lot of the humour in Servant × Service. It’s endlessly heartening to see a more natural relationship forming that doesn’t rely on geysers of nasal blood every time one of the pair does something vaguely romantic. Better still is the removal of the imbalance between the guy and the girl - intentions are made clear, accompanied by all the relevant awkwardness and nervousness that goes with it. From the obstacles on the way to the romance spring much of the comedy with obnoxious childhood friends and honest confusion springing up to cause havoc.

Servant × Service, unlike Acchi Kocchi, is more than a one trick pony and draws upon a well of jokes to carry it through the one season runtime. GJ-bu obviates this situation by, true to the argument against it, largely being about nothing at all. It’s refreshing insofar as it allows for a quiet, composed confidence (iyashkei) to take over that is miles apart from the often raucous capers that the cast of Acchi Kochi gets up to. Taking place largely in one room, the standard activities of tea-drinking and reading manga are all present and correct, however the familiar harem setup of one-chap/multiple-lasses is largely unutilised. Certainly the male lead is the butt of much of the good-natured jokes, but there is little trace of the corrosive adoration that usually accompanies such a group dynamic. Instead there’s just a peaceful amble through each episode with copious hair brushing (trichophiliacs rejoice!) and peculiar banter.

Both Acchi Kochi and GJ-bu cover just over a year of school time: the former taking in valentines day, the school festival, winter and more points in between; the latter steers strangely clear of school events, going so far as to mention them but never elaborate. Neither though, perhaps thanks to their relatively short run, stoke the kind of nostalgic ephemerality (mono no aware) that comes when your time at high-school comes to a close (looking at you here K-On!). More critically though neither, Acchi Kocchi especially but GJ-bu less so, provide enough of an escape from the banality of normal life. The former’s best moments - the truly laugh-out-loud parts - come from the lab-coat wearing Mayoi with mad-cap inventions and a penchant for escalating an idea until its results match her expectations.

Servant × Service meanwhile largely sits on its own, benefitting more as a juxtaposition to the other two’s school-antics than a fair comparison. It follows in the footsteps of shows like Working!! by dipping into an element of Japanese life that has never been covered in anime before. It makes the series’ hook easier to grasp and although the personality of each cast member is easily scryed, they develop and grow over the course of the series as revelations and tribulations assail them.

My belief is that the longevity of series like these largely comes from how easy they are to watch. Like the stereotype of TV soaps for aging ladies, they poke at the familial part of the brain while easing the viewer into an easily understood and inoffensive modern fantasy. By that metric Acchi Kocchi, GJ-bu and Servant × Service tick all of the right boxes, whether it’s the endless calm of GJ-bu, the will-they-won’t-they (spoiler: they won’t) of Acchi Kochi, or the interpersonal trials of Servant × Service. My usual stable of review points are largely without merit when the shows are, by design, but a window on characters’ lives without a pesky overarching plot to mess things up. Suffice it to say then that the comedy hit more than it missed for me in all three shows and, if pressed, I would show a preference for Servant × Service and Lucy’s prehensile antenna. All of them have their merits and though they may not improve the reputation of their genre/classification/argument-bait they certainly don’t do any harm.