Sakura Quest is the most recent series from studio P.A. Works’ “earnest girls working earnestly” genre that it started back in 2011 with Hanasaku Iroha. Sakura’s story starts charmingly enough with the cherry-blossom haired Yoshino being mistaken for a singer from the 60’s and subsequently being hired by the tourist board as a representative of the rural town, Manoyama. Thus begins twenty five episodes of Yoshino and fellow cohorts Shiori, Maki, Ririko and Sanae trying to revitalise the ailing town.

At its heart, the series is about people fighting against the depopulation of a rural town. Once it moves past its initial two-episode stories of Yoshino attempting (and failing) with quick-fire tourist pulls, there are extended arcs focusing on the aging residents on the outskirts of town, as well as the perils of using flashy media pulls, alongside an undercurrent of resigned acceptance to the situation the town finds itself in. And what ultimately awaits it should the situation continue. 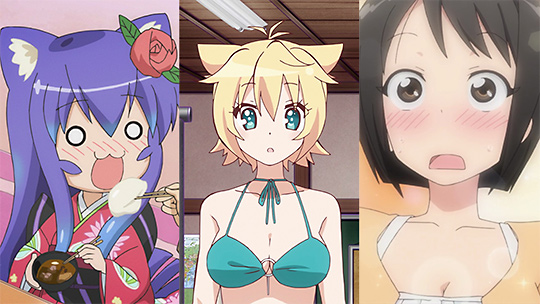 “Ugh, nothing happens!” is one of the oft uttered arguments against contemporary, character-led light comedies or, more colloquially, “slice of life” series. In a sense it is largely true; nothing burns, dies, transforms, flies, barrel rolls, crashes, magically disappears, is chased or otherwise suddenly explodes in slice of life series. It’s an argument that’s largely missing the point though, for as mercurial as the definition of “slice of life” is, the focus is largely on presenting an exaggerated take on the mundanity of everyday life. This is to say nothing of the contentiousness of the phrase and its taxonomic convention, carrying as it does aging volumes of discussion, regardless of the term’s demotic usage.

Three recent (ish) anime which typify the spirit, if not the minutiae, of the term include Acchi Kocchi (Place to Place), GJ-bu (GJ club) - both of which peer into the lives of middle/high-school students - and Servant × Service (or to give it its full title Servant × Service ☑) which deals with the rarely seen world of an entry level Japanese government employee. It is perhaps fair to say though that the success of such a series largely relies upon the personalities of the characters and the ability to keep either the comedy or the drama fresh enough across its run.