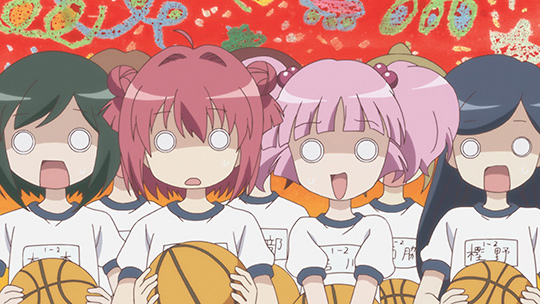 Hironori Toba, producer of Angel Beats, said in an interview prior to its premiere that thirteen episodes wasn't enough to tell the story Jun Maeda had envisioned. He was lying. Somewhere between the baseball episode and the protracted and overblown ending it becomes apparent the series doesn't know what it's doing beyond trying to force the audience to feel something for its tepid and underdeveloped cast. Trapped beneath a script which oscillates from terrible to appalling and a story with more holes and useless caveats than development is some mediocre commentary and a smattering of interesting ideas. It is saddening such high production values are wasted on a show that with some tightening and tweaking could have been immeasurably better.

prancing between ideologies like a hummingbird with ADHD
Otonashi is dead. Now trapped in a mysterious purgatory, he must fight alongside other teenagers against a mysterious girl named Angel who is determined for them to enjoy a school life as normal students. Unlike the other members of the haphazardly coordinated battlefront though, Otonashi doesn't have any memories of how he ended up in purgatory. Everyone else it seems either to have perished in the most ignominious of ways, or wandered in rife with emotional baggage. The war against Angel is not without its complexities though and it is up to an eclectic group consisting of a hacker, a ninja, a judo champion, a spacey rocker and myriad others to tackle each challenge as it arises. Uncertainty is endemic and who was once foe may become friend, they may even meet God himself in this world.

Angel Beats! has a very ambivalent opening three episodes: at times it's dealing with infanticide and domestic abuse, the next it's parodying the first Resident Evil film and punting schoolchildren out of windows with oversized mallets. Written and designed by two notable producers from the powerhouse Key, most often associated with the sad-girls-in-snow franchises of Clannad, Air and Kanon, the first episodes are a grab-bag of different influences and storylines which don't shy away from drama but never shed the feeling that there's a twist approaching rapidly.

Otonashi wakes up with no memories of his past and a girl near him brandishing a high-powered rifle. The girl, Yuri, breaks the news that he has died and is now in purgatory, swiftly followed up by trying to recruit him into their fight against the overseer of the world: Angel. Disbelieving her story, Otonashi approaches Angel, a diminutive silver haired teen, who promptly skewers him with a blade which appears from her arm for his scepticism of whether he can die or not. Waking up unharmed in the hospital, it takes some cajoling but he eventually joins the eclectically organised group and, little by little, begins to discover their reasons for fighting and the militant framework which support their rebellion. Their fight against Angel is becoming more vicious, yet Otonashi's memories show no sign of returning and with the threat of death removed, the only thing he has to fear is disappearing.

Sasameki Koto takes place in a land of almost perpetual sunsets, golden skies and scenery aflame with oranges, all the while impressionable young girls stand in front of illuminated classrooms blushing with possibility. The series lays in thick and fast and doesn't ever prevaricate as to what the majority of it will be about: unfettered romance. Dainty piano melodies and smooth words flow from the opening leaving no doubt as to the position the series takes on its subject matter.

they feel like characters rather than porcelain dolls butting heads

Sumika Murasame loves her best friend Ushio Kazama who is infatuated with cute girls, unfortunately for Sumika she is tall, athletic and bookish preferring to dress in muted polo necks than frilly skirts. While she pines for Ushio a male from her class, Masaki Akemiya, has fallen in love with her and expresses this by cross dressing and posing for a fashion magazine. Things take a turn for the complex when Sumika and Ushio catch two other girls kissing, and from the hints dropped in the first three episodes, it's safe to assume that other potential love interests will be introduced in short order. The story is typical romance fare with the added twist of same-sex relationships but the plights of the cast produces a level of empathy that is wholly unusual.